This is why we all work in entertainment now

The people you’re communicating to have never been more distracted:

It doesn’t matter who your audience is, they’ve never had more distractions.

There was a time when you could assume attention because of your role (as the CEO, Commissioner, President etc.).

But that’s just not the case any more. No matter how serious your message, you must be interesting. There’s too many choices, too many alternatives available in the palm of hand for anyone to persist listening to a boring communicator.

Every message must has to fight for the attention and interest of your audience.

Everyone is competing for attention, which means everyone is an entertainer now.

You’re by no means alone if you’re struggling or scared of the video camera. Trust me – it gets much easier with a little bit of time and practice.

Our advice to clients is always that it takes about three sessions in front of the camera to really feel natural. So with time and practice, you’ll be videoing like a pro (and perhaps even a youtube celebrity!).

In any case, here’s 10 tips that will help you get more out of video from day one:

1. Film early in the day, when you’ve got plenty of energy

2. Have a conversation with someone behind the camera

One of the easiest ways to film great video content is to have a conversation with someone directly behind the camera. Write a list of questions for them to ask you (maybe even questions you commonly get asked in sales meetings). By focusing on the conversation and answering their questions, you’ll quickly forget there’s a camera in the room. Then it’s just a matter of finding highly engaging segments from the conversation to use – and there will be plenty.

3. Everyone hates the way they look on camera

It’s a fact of life that no-one really likes the way they look on video. But persist, because seeing yourself present will make you a better presenter. You’ll have much more boardroom awareness of the unconscious mannerisms in your presentation style.

4. Script, but not too much

For first timers it’s a really BAD idea to fully script the video and work with a teleprompter. You won’t present as natural and authentic, and that matters a lot more than any line of your script. Start by scripting with bullet points that structure what you want to say, but give you room to talk naturally about each point. It’s always a good idea to run these through verbally. No matter how good a script reads, there will be places that don’t work when you say them out loud. And the first time you talk to a script will never be the smoothest.

Editing gets really expensive, really quickly. If you’ve ever tried to edit a video (even in iMovie), you’ll know it takes a long time (multiple hours per minute). The alternative is to keep your videos short, and shoot in one take, so pieces don’t have to be combined together. For business blogs and testimonials. Wherever possible, avoid editing. Even beginners can get through 1-2 minutes of video using tip #2

TED talks can hold someone’s attention online for 20 minutes. But they’re the exception and not the rule (and they’ve been practicing for at least 6 months prior to delivery). For business videos, you’ll struggle to retain viewers beyond 90-120 seconds, no matter how interesting you think the content is. So keep your early videos short until you have a deeper understanding of what really engages your audience. Shorter videos take a lot less time to record, and you’ve got less chance of blunders in delivery.

You want to talk a little faster and be a little more animated than you are normally. Because video is a one way conversation, you need a little bit more energy than normal to hold the attention of the viewer.

Resist the temptation to yell “oh f*ck”, “start again” or “I really screwed that up”. Stay cool and finish talking through what you wanted to say. There’s two reasons to do this. Firstly, you can easily verbally ‘block’ yourself through repeated stopping and starting. You want to remain flexible and loose, and that means running with your key messages and recovering from blunders. Think of it in exactly the same way as you would in a sales meeting – no matter how badly you enter the room, you keep going. Secondly, you’ll be surprised how often your pause or blunder doesn’t look as bad as you thought it was. Watching it back, you’l find more usable footage than you thought.

9. Remind yourself what’s most important

It’s easy to get focused on the script, camera gear, lighting etc, and forget that there’s a person on the other side of the camera that you’re trying to convince. What do you want them to understand, or do?  It’s always a good idea to step back and ask yourself “What’s the #1 thing I need to get across in this video?”

Is your email worth more or less than $50? 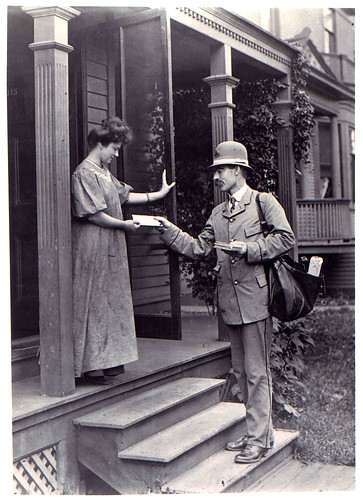 The email address is the holy grail of B2B digital marketing…

When you boil down what we do in B2B digital marketing, a lot of our work is coming up with new ways to capture the email address of prospects that are visiting your website. And like most good things in life, you have to give value if you want to get value.

So if you want to capture an email address of a prospect, the question that I’m thinking about is how much value do you need to give?

In other words, how much value does someone visiting your website need to perceive, in a dollar sense, to give you their email?

I’m going to put a rough stake in the ground and say that for me, it’s equivalent to a decent sized book. Which I’d put at about $50. So if I think giving you my email address will deliver me more than $50 in value, you’ll get my email… otherwise I’ll keep browsing.

From a marketing perspective, this has great implications for your website. Do you offer $50 worth of value? How much value does your website offer right now?

Your personal email may or may not be worth $50. But it’s still worth something significant. The #1 job of your website is to persuade visitors just how valuable handing over that email address will be (in a very credible, professional, and non scammy way).

Thinking about this in a pure dollar sense can help a lot in terms of clarity of your value proposition.